A day in the life of an introverted mum 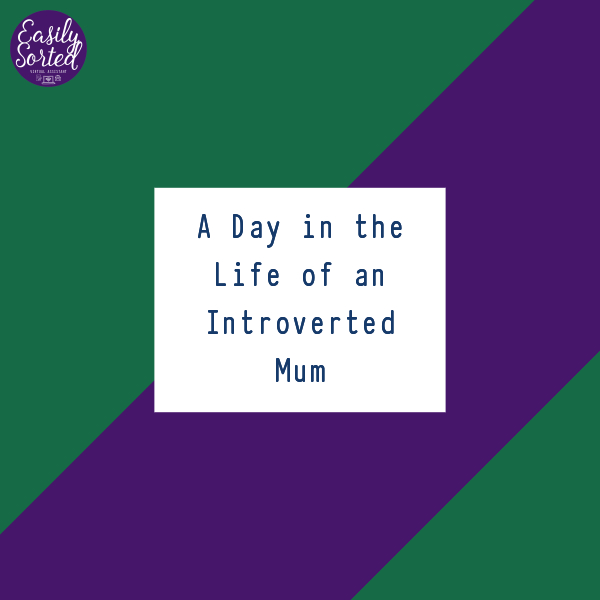 I’m thrilled to be part of the Introverted Mom content tour, celebrating the release of Introverted Mom: Your Guide to More Calm, Less Guilt, and Quiet Joy by Jamie C. Martin. Releases 7 May 2019. Preorder now and get a bunch of bonuses, and (if you’re Stateside) it’ll arrive in time for Mother’s Day.

Because I’m a mum to four kids, the youngest being just shy of 6 months old at the time of this writing, I’ve left this post till almost the last minute. So the best thing I could come up with is to write about an average day in our house. Which will change in another month because kids grow, seasons change, and nothing ever stays the same. But here’s what my life is like now.

Sometime between 7-8 am, I’m awake for the day while my night working husband keeps snoring away. Either one or both of my smaller boys (who sleep in our bedroom with us) has woken me up. I drag my tired self out of bed and change the baby’s nappy in the bathroom, at the same time trying to convince my two year old to wee in the shower. He eventually does.

Straight from there, I go into the kitchen, where the two year old says “something to eat, Mum.” Which is really code for “I want you to open the fridge so I can play with everything and ask you the name of everything I don’t know yet.” Sometimes, we manage to both agree on something he can eat before the fridge starts beeping that the door’s been left open too long. Other days, I shut the fridge before he’s decided and because he’s two, he has a meltdown.

I put the baby on the floor or in the high chair while I put the kettle on, and think about what I want to accomplish that day. Sometimes I do the dishes first thing in the morning if I’m feeling ambitious. Other days I make my cup of tea and sit at my computer for ages scrolling through Facebook because I’m just too tired.

Anyway. Eventually the oldest gets up. He’s 12. This is when I know I can go out shopping, or get some other stuff done that I can’t do while holding a baby. He’s pretty competent looking after his little brothers – a bit impatient, but he’s 12.

10 am and it’s time for the older boys to do their lessons. We homeschool, and they have a certain number of workbooks that they do on their own each day. Twice a week they do maths with their dad. Sometimes, as you’d expect, they complain.

Usually around this time, the baby goes down for his morning cat nap. He’ll sleep about 15 minutes in the Ergo – on my front if I’m sitting at my computer, or on my back if I’m working in the kitchen.

After the kids finish their lessons, which SHOULD only take half an hour on a good day, they usually go outside to play. The two year old goes with them.

Around 11 most days, my husband gets out of bed. We’re both night owls, which is why he chose to work the shift he’s on, but some days the wait to 11:00 feels like an eternity.

Let’s call today Tuesday. That’s one of the days he does maths with the older boys, and we usually don’t have to go anywhere. So after he’s up and about, and had his morning caffeine fix (not coffee or tea – Coke), they get their maths books out and talk about that day’s lesson.

Usually during the maths lesson, I need to get lunch started. And the baby wants me. And the toddler needs to be supervised. Sometimes it’s a struggle to keep everything in check. If the older boys are having a good day, they get through their maths lesson quickly. On other days, one or both need extra motivation. One boy in particular has a tendency to think everything is too hard and might try to avoid his work.

Lunch time comes around, and it’s also the baby’s nap time. As it always is when Mum wants to sit down and eat! I usually take him into the bedroom and lie down with him to feed him to sleep, then come back to my cold lunch once he’s settled.

Then hubby has to get ready for work, which means I’ll be on my own with them for the rest of the day. Yep, I get to do bedtime with 4 kids all on my own.

It isn’t always as bad as it sounds though. The older two can get themselves ready, and now that the baby has more of a routine, it’s just the two year old’s inconsistency that throws things into chaos. For now.

But before that happens, there’s the afternoon and the evening to get through. And I still, most likely, haven’t had a minute to myself since I woke up, unless I actually got to go to the toilet by myself. By this time it’s starting to show in my mood, if it hasn’t already been obvious. Fortunately (or unfortunately?) we have a convenience store right across the road (literally – our driveway and their exit almost line up perfectly) that sells chocolate. I have no idea how much money I’ve spent over there on Medicinal Chocolate in the last 12 years, but I’m sure it’s a lot.

(I was lucky enough to get on the launch team for Introverted Mom, so I’ve been reading the book before release date. I’m finding some strategies to get more time to myself throughout the day that I need to start implementing. Things like a mandatory ‘quiet time’ for everyone – but it’s hard to do in a small house, with so many kids, and a baby who doesn’t necessarily sleep at the same time each day.)

So the baby’s asleep, the older kids may or may not be playing on screens, and the two year old is probably begging me to watch The Wiggles. Because I need a break from the chaos, I let him watch an episode as long as he sits on the potty first.

If I’m very, very lucky, the baby will stay asleep through the Wiggles and I’ll get half an hour to an hour of (relative) peace and quiet in my office at the back of the house. I’ll sneak my chocolate, listen to podcasts, play computer games, or try to get some work done for a client.

If I’m very, very unlucky, the two year old will fall asleep watching the Wiggles which means he’ll be up late. My worst nightmare at the moment.

And now it’s dinner time, and kids are starting to get tired, and fight, and melt down over the silliest things. Because my husband works nights, we have our family meal at lunch, and usually leftovers for dinner. So the big kids grab their own from the fridge, one of us gets something for the two year old, and we sit down and eat.

After dinner, depending on what time it is, I’ll sit down and watch a TV show with all of them, or let the older three watch a cartoon while I get the baby to sleep. The 7 year old goes to bed at 9, then I watch something with the 12 year old and cuddle the two year old till he falls asleep. 12 year old goes to bed at 10, and if the toddler hasn’t had a nap, I’m finally free for the day.

Or at least till the baby wakes up for a feed.

My husband gets home anywhere between 10:30 at night and 1:30 in the morning. If it’s an earlier night, we’ll sit down and watch something together. If it’s one of the late ones, I might watch something by myself, or sit in my office and listen to podcasts till about midnight, when I go to bed myself.

Wow, I’m exhausted just reading that back to myself.

How and when do I get time to myself?

1. When the baby goes to sleep, sometimes I stay in the bedroom and lie next to him for a while, just to be away from everyone else.
2. I go for a walk across the road to get chocolate or peach iced tea.
3. I hide in the toilet longer than I need to be in there.
4. I stay up way too late.
5. I escape to go shopping while the baby’s asleep. At least I’m alone for the 5 minutes it takes to drive there!

I’ve pre-ordered the Audible version of Introverted Mom. That’s the best way for me to absorb new content at the moment. I’m so looking forward to that.

You can pre-order your copy from Amazon, Book Depository, Koorong in Australia.