How I’m weaning myself from Big Tech

Big Tech is getting to be a problem for many people. No doubt you’ve heard rumblings of censorship in the last few months. Big tech companies are getting into every part of our lives, and many of us want to get away from that.

But how, when they’re so pervasive? Facebook and Google track you everywhere you go. When you come across a recommended product online, it’s usually an Amazon link. Microsoft struck deals years ago with PC and laptop manufacturers which requires Windows to be installed on new computers. If you dare to remove it to use another operating system, you void the warranty.

The five biggest tech companies in the world right now are Apple, Microsoft, Amazon, Google, and Facebook. Let’s go through each of them one at a time.

I haven’t used an Apple device in years. I got an iPhone when I was pregnant and stressed 9 years ago (that’s my excuse and I’m sticking to it!) and regretted it within 6 months. About two years later, I switched to an Android device. I gave away the iPhone to someone who was looking for one and have never looked back.

Apple severely limits what you’re able to do with your own device that YOU purchased and own. You can jailbreak it and gain a little more control, but not much.

Apart from an Android keyboard on my phone (which I’m trying to find a replacement for), I also haven’t used Microsoft in years. We haven’t had Windows installed on even a laptop since 2016. The only thing I ever used Windows for was to file my taxes, and in 2016, the ATO released their online tax filing. Which meant I never had to use Windows again to file my taxes. Yay!

My husband and kids still use one Microsoft-owned product, but I don’t think they’ll be getting off Minecraft anytime soon. 😉 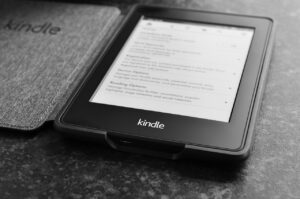 Ooh, this one hurts. I loved having Prime, especially living in Australia where shipping costs an arm and a leg. But I can’t support a company anymore that actively discourages free speech. So today, I closed my Amazon account for good. I’m still sorting out where I’m going to buy books and things from. I’d prefer to buy from within Australia to support our own economy and to save on shipping costs. If you have a good recommendation, let me know in the comments!

And before you say Book Depository because they have free shipping worldwide, guess what…Amazon owns them too. 🙁

This one’s going to be hard. But we’ve been slowly working toward getting off Google for years.

My husband has always been about free, open software, so he’s been looking for (and using) big tech alternatives since before we met. We’ve always had our own email servers, and apart from using a hosting service for my business websites for a few years, we’ve managed our own web server as well. For a while this was at home, but the downfall of that is if the power goes out (which it often can over summer), we can’t access our own email or websites. So a few years ago, he found what’s called a VPS (Virtual private server) provider called Vultr to host our services on.

All of our websites (including the one you’re reading this on!) are hosted on our Vultr servers.

He set up our own Nextcloud server a few years ago. Nextcloud is an open source alternative to many services – calendar, file storage, chat, email, bookmarks, and more. It offers so many options I can’t even list them all! Nextcloud is completely free, and you manage it yourself so you know exactly who’s looking at your data.

Nextcloud even offers an app for your phone, so you can automatically upload photos you take and save them to your own personal cloud! You can install a gallery plugin to share photos with others as well.

As far as using Google sites themselves, for a start, I’ve switched my default search engine to DuckDuckGo everywhere that I can. Yes, even Chrome will let you do this. You can also install the DuckDuckGo browser on your phone, which also blocks big tech third party trackers like Google, Facebook, and Amazon by default.

But of course, there are some Google sites that we can’t replicate at home. YouTube, for one. It’s full of all kinds of content, useful for personal growth, education, entertainment, and news. A couple of people I follow have cloned their channels on a site called LBRY so I’m keeping an eye on that one now.

And I have an Android phone. Which is Google. I can’t get away from Google entirely, but I can choose what device I use, based on whether or not it can be rooted (this means being able to gain control of the full device and install your own operating system on it). My current phone can be, and at some point in the near future (once I get the nerve to actually do it!) I’ll back everything up and install Lineage OS. Lineage OS allows you to choose how much Google you want on your Android phone. Yes, that means you can actually uninstall Google apps and not just disable them!

Of all the big tech companies out there, this one might be the hardest to get rid of. Almost everyone I know is on Facebook. I’m in dozens of groups for homeschoolers, co-ops, budgeting, friends, and the list goes on. Almost my entire family is on Facebook. It’s just one of those things people have come to expect.

But isn’t it creepy when you mention something to a friend, and a few minutes later an ad shows up on Facebook for exactly what you were talking about? They’re always listening.

But there are alternatives popping up. Parler is a popular one similar to Twitter. They made the news recently due to a mass-exodus from Twitter. Then, the Parler app was removed from Apple and Google stores, and Amazon revoked their hosting account. They’re back online as of yesterday, but the platform will take a while to rebuild.

Gab is an option similar to Facebook. Gab was banned from app stores several years ago, when they refused to enact censorship on their platform. So they built their own servers and run everything themselves. Andrew Torba, the founder of Gab, calls it a free speech platform. That means that all speech which is protected by the US constitution is also allowed on Gab. They are funded 100% by user donations.

But my favourite Facebook alternative so far is MeWe. It’s free with a paid option, they don’t advertise to you, and they don’t ban you for daring to question what you see and hear in mainstream media.

MeWe offers groups, pages (for a monthly fee), chat, and events. There isn’t a separate app for chat, so it’s only one app to install on your phone.

It IS possible to wean yourself off big tech.

It’ll take a while, and you have to be persistent, but you can do it. Slowly but surely.

If you’re keen to explore social media outside of Facebook, Instagram, and Twitter, I’ve created a group on MeWe called Easily Sorted SAHM community. This is where I’ll be sharing content about being a mum, working at home, homeschooling, budgeting, meal planning, all the things. Join us!